At Let’s Do This, we’re always on the look out for the best events for you to discover next. The Olympic Distance Triathlon, also known as the Standard or International Distance, includes a 1.5km/0.93 mile swim, a 40km/24.85 mile bike, and a 10km/6.2 mile run. So, I’ve picked out some of the most iconic Olympic triathlons in the world.

From landmark city events to exotic tours, and covering 4 continents, here are the 9 most incredible swim-bike-run events over the Olympic Distance plus a few more that don’t quite fit the official distances but I wanted to include for good measure. Having competed in the 2019 Ironman 70.3 World Championship in Nice, these Olympic Distances triathlons are definitely on my bucket list.

Find your next Olympic triathlon

The route: The swim section takes place in the epic Pacific Ocean, the bike course takes you out-and-back along the awe-inspiring Pacific Coast Highway, and the tarmac run takes you along the sands of Zuma Beach. That’s a pretty impressive course description.

Why: You will benefit from some incredible views of the ocean on one side and mountains on the other. This event is also a great opportunity for celebrity-spotting, as there as an Entertainment Industry Challenge over a slightly shorter course for charity. In previous years, Tom Cruise, Jennifer Lopez, and Jennifer Garner have taken part.

The route: After a swim in the famous River Thames, you’ll pass through the historic streets of Windsor and past Windsor Castle on your bike before heading into the surrounding countryside. The run takes you into Windsor Great Park, along the impressive Long Walk. A royal flush!

Why: No triathlon comes close to this one for prestigious surroundings, and you’ll leave feeling like a true royal. Not many people can claim to have biked around the Queen’s own grounds. The picturesque views and historic landmarks make this triathlon fit for a King. Who will be crowned winner?

The route: The swim is one lap of the Outer Alster Lake (or Außenalster), before the bike leg takes you on three laps through the heart of the city, including historic areas such as Speicherstadt, Landungsbrücken, and Reeperbahn. The final run section follows the west bank of the swimming Lake.

Why: This is one of the few city triathlons that actually passes through the heart of the city. Taking in the most famous warehouse district, the St Pauli Piers, and the heart of the entertainment and nightlife district, you get a great feel for Hamburg’s old town. This event boasts the world’s biggest crowds for a triathlon, with over 300,000 spectators lining the streets and cheering you all the way.

The route: The course focuses on the scenic setting of Fengtai. The swim is in Garden Expo lake, and then the bike is a challenging route through Fengtai’s picturesque villages and up Qian Ling Mountain. The run passes through colourful gardens and then back up the steep steps of Garden Expo Park to the finish.

Why: This event allows you to experience Fengtai’s eco-friendly environment and cultural landmarks. The lush gardens of the Garden Expo are modeled on some of China’s most iconic regions, so it’s a fascinating observation of China’s natural scenery. It is also a chance to qualify for the Escape from Alcatraz triathlon below.

The route: The swim is in the Royal Victoria Dock of East London. The bike then takes you along the north bank of the River Thames, until a turning point at the iconic Houses of Parliament in Westminster. You then complete 4 laps of the run, cheered on every step of the way by large crowds and pumping music.

Why: One of the biggest mass-participation triathlon events in the world, with over 12,000 competitors. It is also one of the best organised triathlons, with the ExCel Centre serving as the main event hub and providing a range of shops, entertainment and atmosphere. For all competitors and spectators, this is a day that will stick long in the memory. The event spans the entire weekend and becomes a festival for triathlon sport.

The route: Following a swim in the sheltered Monroe Harbour, and a traffic-free bike course through one of America’s largest metropolises, the run section goes through the iconic Museum Campus, surrounded by raucous and inspirational support.

Why: Swimming in crystal clear water while skyscrapers tower above you has to be on any triathlete’s bucket list. This is one of the most spectacular city triathlons on the circuit, and on the bike course you might begin to understand why Chicago is known as the windy city – hold on!

The route: The swim leg takes place in the calm but stunning waters of Laguna Bay off Noosa Main Beach. The bike section takes you out from Noosa Heads along to Noosa Sound with some technical climbs and downhill sections, before returning for Transition 2. You finish with an out-and-back run with a grandstand finish on the waterfront.

Why: This is one of the biggest multi-sport festivals in the world, and offers the perfect combination of sun, sand, and sea. Not only is the event a huge adrenaline rush, but the end of weekend celebrations start off with a massive beach party at the Surf Club, and then things really get going at the Reef Hotel after party.

The route: Starting at the iconic Venice Beach, you swim in the Pacific Ocean before getting on your bike and heading through the streets of LA, heading uphill to Olympic Boulevard. After some scenic hills, you head down into Downtown LA for the run, which heads west towards Koreatown on a two-lap course. This route gives you a taste of everything LA has to offer.

Why: This is a completely unique way of experiencing the variety and sights of Los Angeles. The setting on Venice Beach alone is breathtaking enough, but this event has the lot. It’s highly reviewed for its flat and fast course design, and there are Sprint and Relay options if you aren’t yet ready for the International Distance.

The route: The swim takes place in the clear waters of Dorney Lake, which was used for rowing events in the Olympics. The bike and run courses are then completely flat taking you around the lake and giving you a great opportunity for a PB. Now that’s girl power.

Why: This race is a great opportunity for women to get involved with triathlons, as it’s exclusively for female triathletes. Beyond the Olympic Triathlon, there are 7 other distances on offer, as well as other multisports, so women of all abilities can come and have a go. If this wasn’t already reason enough to sign up, the event is organised to raise money for Breast Cancer Care.

Ok, so I couldn’t resist adding a few more events that don’t quite fit into the Olympic distance triathlon category. But, if you’re here looking for some truly epic triathlon events around the planet, then definitely check these ones out.

The route: Distances: 1.4 mile (2.4km) swim; 18 mile (29km) bike; 8 mile (12.9km) run. Jumping off the Belle steamboat into the strong currents of San Francisco Bay’s spine-chilling waters, the 1.4-mile (2.4km) swim goes from the infamous Alcatraz Island to Marina Green Beach, by St Francis Yacht Club on the shore. This is followed by a challenging bike section which includes stretches in the Presidio, the Golden Gate Park, and on the Great Highway before returning to Marina Green. The even more challenging run finishes off the route, turning at Lincoln Boulevard by Baker Beach Battery, before heading through deep sand and up 400 cliff steps until they finally head back to the hub.

Why: This has become one of the most famous triathlons on the circuit, and is the target of several qualifying races (see the Beijing International Triathlon above). Each leg provides its own fresh challenges, and even the most experienced triathletes will really have to dig deep at a number of stages. The payoff is definitely worth it though, as it is an event on many triathlon bucket lists, and for good reason.

The route: Distances: 1.8km swim; 55km bike; 12km run. Starting from the beaches of Laguna Beach Resort, you swim in the crystal blue waters of the Andaman Sea, including an ‘Australian exit’ two-thirds through, where you exit the water before running to the lagoon finish. The bike course takes you through the northern section of Phuket, with some challenging ascents up the Naithon hills. The route takes you through stunning rainforests and finishes with two laps of the Resort. The run leg stays within the resort passing various landmarks.

Why: The above description should give you an idea of how luxurious the surroundings are. The climate will be hot and humid, so it’s a challenge, but the breathtaking setting makes it all worth it. However exhausted you are, you’ll definitely be able to find energy for the after party at Laguna Grove, where the cocktails are copious.

The route: Distances: 1.2km swim; 28km bike; 6.7km run. The short, fast swim takes place in Lac du Verney, where it is not permitted to swim at any other time of year. The bike starts off by passing through the valley between Lac du Verney and Bourg d’Oisans, before heading up the legendary Alpe d’Huez climb and all of its 21 switchbacks. The gradient reaches 8%, and you’ll feel like you’re part of the Tour de France. The altitude run (1800m) climbs another 100m and requires a serious effort of endurance, but its worth it for the sense of pride as you cross the finish line.

Why: There is no more fitting location for a multi-sport endurance event than the French Alps. With unforgettable scenery and a challenging course, this will be an achievement you tell your grandchildren about. There is also a Triathlon L for those seeking an even longer test of mental and physical fortitude.

Can’t see your favourite triathlon? Let us know in the comments and we’ll add it in. 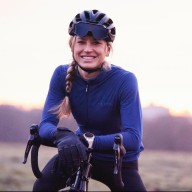 Back in 2016, Steph swapped her skis for the bicycle and hasn't looked back since. She then joined a triathlon club in Edinburgh, and only a couple of years later came 21st in 2019 Ironman 70.3 World Champs. Since then, she's taken on a number of ultra running and cycling challenges, most notably the infamous 'everesting' cycling challenge. Steph is currently sponsored by Le Col, 2XU, and SunGod.