Pacing London: what it’s like to pace London Marathon

You don’t need to be a fast runner to work at Let’s Do This, but that doesn’t stop Let’s Do This data scientist, Simon Wright, from running sub 3 hour marathons in his spare time.

A 2:53:20 marathoner, triathlete and enthusiastic orienteer-er, Simon added yet another string to his bow this month when he paced the 2022 London Marathon.

Read on to hear from Simon himself about his experience as a London Marathon pacer – and how you could get involved too!

I like running. But I love maths*. So maybe it’s unsurprising that I found myself drawn to the prospect of pacing for races.

I first got involved in pacing very informally last year, pacing a couple of my colleagues to 10k PBs. After that, I decided to give it a go officially this year at the London Landmarks Half Marathon, managing to soak up the atmosphere while leading around a hardy band of 20 runners to a 1:45 finish. And what better place to look to replicate that feeling than at the London Marathon?

In June, I found out that I’d been selected to pace the race at 3:15, the top end of my three suggested times, which would be a challenge!

So, what is pacing?

The premise is very simple: it’s very common for runners to get very excited on the day of a big race and fly off the line.

Wouldn’t it be great not to have to worry about a burst of adrenaline threatening your race from the off? That’s where pacers come in, to run a consistent pace for the whole race to give you one less thing to worry about.

In the run-up to the race, I tuned up with some practice pacing at Wimbledon Common parkrun (mostly successfully!) and then again at The Big Half, getting some experience pacing in a crowded atmosphere.

The most important thing is to make sure you hit the splits. Not going faster than the splits, not “banking time” in case things go wrong, but running at almost exactly the target split the whole time. I did a lot of 6-8 mile runs at this target pace to try and lock in that feeling, so it would be natural on race day.

Race morning was a 5:30am start. Despite the fact that I had to be at the start earlier than most, there were still plenty of other nervous-looking runners eating breakfast on the train to Blackheath. I went for two bagels with peanut butter and a banana, which is nothing new for me on race day, just slightly more than normal!

By 8am all 76 pacers were congregated in a function room in a hotel to talk through the final bits of logistics. We’d been told to be quiet on the way there as people in the hotel might be asleep, but I think the steel drummer at the front door had already taken care of that! All that was left to do was pick up our flags and our lifelines: the pacing bands (a piece of paper with the split time at every mile) and a 5k board to wear round our wrist to check our progress. Even my maths gets a bit suspect when tired at mile 24!

It wasn’t until I walked to the start that I appreciated the vastness of the event. Over 40,000 people from all over the world at the start line, all nervously waiting to take on the same 26.2 mile challenge, hoping that the forecast wind and rain wouldn’t materialise. After a paradoxically short wait that felt like forever in the pen finding a small crew who were in for 3:15, we were off.

Strangely, the first couple of miles are a couple of the hardest when pacing – it’s very easy to get swept along with the adrenaline of the masses!

This is particularly true in London as there’s a decent downhill section in the first three miles, so you can get well ahead of schedule. There were no issues this time, getting into the habit of checking the watch at the mile board – 11 seconds ahead at 4 miles, perfect.

The first half of the race was spent chatting to the runners who were following us, most of them raising money for various charities, ticking off the miles and soaking in the atmosphere around Greenwich, Rotherhithe, and the crowd on Tower Bridge.

After we came through half-way 35 seconds up–just as planned–we saw the elite men come the other direction. You can’t help but feel a surge of energy from how quickly they’re still going, 22 miles in!

Sadly over the next 8 miles, most of our original pace group dropped off one by one, still running fantastic times but not quite able to hold the pace. It’s one of the hardest things about pacing, you have to keep going exactly on schedule, and can’t adjust to help people who you’ve been running with for the past 2 hours.

The last 5 miles of the London Marathon are spectacular. I was lucky enough to run the Boston Marathon earlier this year, and the crowds at London may have been even bigger and louder than there. It seemed there was constant noise from Tower Hill, down the Embankment and carrying everyone the whole way to the finish line.

Personally it was quite nice to have worked hard but not feel on the absolute limit in the last few miles, soaking it all in as I picked up a few runners who had faded a bit in the middle but were finishing strong.

It’s always a relief to stop the watch on the line and realise you’ve managed to pace the race well. Afterwards I managed to catch up with a couple of the runners who had been in the group for the first couple of hours who had still managed to run big Personal Bests – this is why we pace!

How to get into pacing

It’s not quite as tiring (at least not physically) as racing and often you get even more of the atmosphere – mainly because you’re so identifiable and the crowd love cheering for the pacer! It’s also a great way to meet and speak to lots of interesting runners.

Pacing is for everyone – at London there were pacers for finish times from 3 hours through to 7 hours 30 minutes. Provided you can keep going at the pace and you’re friendly and encouraging to everyone around you, you can be involved!

If you are interested, there are sites you can volunteer with that provide pacers for races across the country. Alternatively, Google events you’re interested in racing and see if they have pacer opportunities.

As for me, I’m hoping to race the 2023 London Marathon, but I’m already considering my 2024 pace application!

*Maths skills are not required to pace!

If all that pacing chat got you excited about taking on a big city race for yourself, check out our full list of marathons, and start training for your own incredible race day experience. 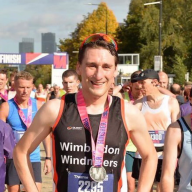 Originally from Belfast, Simon took up running when he moved to London seven years ago because he wanted to do a triathlon but didn’t want to get overtaken by literally everyone else near the end. Having hugely overcompensated, he can now be found “enjoying” muddy cross-country races and running endless laps of the track in Wimbledon while training for the next marathon challenge.