Black Girls Do Run UK was founded in March 2019 by Tasha Thompson after 20 years of noticing the lack of representation at events and within the running community, particularly in her hometown of London. Tasha is now a pillar of the running community and continues to inspire us all to get moving. The collective has bustling WhatsApp and Facebook groups as well as keeping everyone up to date on their Instagram.

Previously, when thinking about traditional running clubs, you might imagine a group of lean, middle aged white men dressed in singlets running through the rain. Well, thanks to the work of people like Tasha and crews like Black Girls Do Run UK, that picture’s beginning to change. Tasha and her running collective are doing all they can to dispel traditional images of the running community and to energise the industry by encouraging black women to become runners, because in the end, “you can’t be what you can’t see.”

Black Girls Do Run UK are working hard to break down the various hidden barriers to entry within running. Whether it’s the feeling of not belonging at your local 5k parkrun, or the expectation to look a certain way, or simply finding the term ‘runner’ too intimidating – Tasha is on hand to provide a realistic role model for those who are nervous about entering the space and, ultimately, to spread the joy of running. She advocates the benefits of running not only for physical fitness but for its positive impact on mental health. Ultimately, the benefits of running should be experienced by all, and without the incredible work of Tasha and collectives such as Black Girls Do Run UK, this wouldn’t be the case.

I recently spoke to Tasha about what it means to be a black woman in the industry, a situation which I happen to share with her. Personally, I’ve always staunchly proclaimed that I’ll never be a ‘runner’. I don’t actually know whether that’s because I didn’t feel like that world was made for someone like me, or I just couldn’t imagine myself taking part or, in fact, because I just don’t enjoy exercise that much! But, while some of what Tasha has to say validated my initial concerns, it did more to counteract them and her joy of running supersedes many anxieties I had and is clearly infectious. You know what, I might actually go for a spin around my local park… at some point.

Gina: In your opinion, what does it mean to be a ‘runner’, is it something you attach to your identity?

Tasha: I am a runner and running is definitely part of my identity and how I am often identified by others. For me, being a runner is to simply be someone who runs, enjoys running and becomes miserable if they cannot run – because it is such a big and important part of your life and who you are. It is not about racing, speed, distance, fitness levels or running daily, it is a feeling where life isn’t quite right without running.

Gina: Which black runners have had the biggest impact on your relationship with running, and in what ways?

Tasha: It’s nobody famous nor an elite athlete, but a woman named Jenny Burrell who I knew from the gym – she was the first black woman I had ever heard of saying she ran the London Marathon and it made me stop and think, maybe I can do it too! I am not sure if Jenny still runs but she has gone on to do brilliant things and is the founder and head of Burrell Education one of the UK’s leading-edge educators in the field of modern Pregnancy, Post Baby, 3rd Age (Peri-to Post-Menopause) and Female Fitness, Wellness, Massage + Bodywork Therapies.

Tasha: It is difficult to hone in on one hurdle, but the main ones are:

Hair: Afro hair whether in its natural state or chemically altered doesn’t react well to sweat and this is often a major off putting factor for black women.

Habit: Once those obligatory school P.E. lessons no longer need to be done, that is the end of any form of physical activity for many women unless they loved it.

Body image and self-consciousness: Age-old myths surrounding the ideal runner’s body is a massive hurdle for all and is responsible for a lot of anxiety and feelings of inadequacy. Running is a good way to improve personal perception of body image and, as a result, feel less self consciousness because it is about function not looks – but this doesn’t happen overnight.

Gina: How much of an impact does not focusing on times, splits or performance have on you and the other women in Black Girls Do Run UK?

Not focussing on the performance aspect of running makes running a possibility for more women. It means that you don’t feel like a failure if you are unable to run a 10 minute mile or if you don’t run a sub 30 minute 5k race. It enforces that your only competition is yourself and from what I have seen runners whose focus isn’t on performance are much happier runners, because every day is a PB as long as you are doing your best.

Gina: How important are running collectives like Black Girls Do Run UK in supporting more black women to take up the sport?

Tasha: Collectives such as us and Fly Girl Collective are important because we are focussing on a niche area of women who are underrepresented in recreational running. You can’t be what you can’t see, so being part of a running group that focuses purely on black women and is led by a black woman who runs the run and talks the talk has a domino effect on other women and plants the running seed in the minds of others and the desire to run grows from there.

Gina: 10 years from now, what differences would you like to see within the black running community and the wider industry?

Tasha: I would like to see more black women and women in general running and more groups focussing on niche areas as it’s a win, win for the industry as a whole. Creating these small running collectives grows the sports by encouraging more people to run and includes more people on the start-lines of running events.

Gina: What’s special about having the support of the Black Girls Do Run UK squad at running events?

Tasha: The support we receive from each other is magical and it is so uplifting – we really feel the love. We support each other virtually and in person. Virtually by sending messages of encouragement and congratulating each other and in person by going along to races to cheer each other on.

Gina: Where does your motivation to keep running come from?

Tasha: Just like many runners I have those moments where I don’t feel like running, or when life outside of running gets hectic and it’s impossible to fit it in, but thankfully my motivation doesn’t dip too often and I am very good at fitting runs in around my life. My motivation to run is from not wanting to start from scratch again, because I often crave green space and to experience the free feeling running gives me. Lastly, it’s impossible to not to run because I am surrounded by so many inspirational runners. 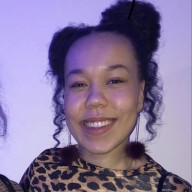 Gina calls North West London home and has recently returned from Amsterdam, having lived and studied there for a couple of years. She loves to share stories and elevate the voices of people from all walks of life. You're more likely to catch her acting a fool singing and dancing than at the local parkrun - but never say never!