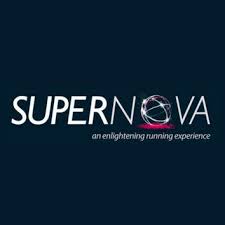 Event passed
Results & Photos
About
Run 5k through Queen Elizabeth Olympic Park illuminated by magical lights. This will be an unforgettable running experience in one of London's most iconic locations, where Olympians have been crowned.

Where and when
Location
A4, Charing Cross, London WC2N 5DU, UK
Start times

Supernova London:
8:00pm
Races summary
Here's what races are available for Supernova London
Supernova London
5km
Route information
The iconic ArcelorMittal Orbit marks the start of the Supernova 5k route in Queen Elizabeth Olympic Park. You then head north along Stratford Waterfront and then cross the bridge towards the London Aquatics Centre, which has seen so much Team GB success over the years. You then recross the bridge and wind north through the spectacular Olympic grounds.
Having passed the magnificent Olympic stadium, head south for the final push along the canals.

What's included
How to get there
A4, Charing Cross, London WC2N 5DU, UK
Get full directions

Supernova
View more Supernova events
Kit List
We encourage entrants and spectators to wear fluorescent clothing on race night to enhance the visual spectacle of the supernova!
Reviews
This event currently has no reviews, why not be the first? You could help someone find their perfect event.