By using this website you agree to our
OverviewDetailsReviews

Why book with us?

Take part in this unique endurance events festival around Snowdonia National Park. Triathletes new and experienced will relish this challenge and be rewarded by amazing views, trails and a festival atmosphere. Come for the unique finisher's medal or for the epic surroundings.
C-19 Plan
Always Aim High Events has confirmed that this event will be going ahead as planned on Friday 11th Jun 2021 in accordance with the COVID-19 safety measures. Learn more

Jane T
"Fantastic event in breath taking scenery. It is hard so you do feel you have..."
See all reviews

How to enter the The SportPursuit Slateman10 Triathlon & Duathlon

Llyn Padarn is a magnificent glacially formed lake nestled admist some of Snowdonia's most spectacular scenery. The lake is approximately 2 miles (3.2 km) long and covers about 240 acres making it one of the largest natural lakes in Wales. On the southern bank sits the busy village of Llanberis whilst on the opposite side the Llanberis Lake Railway runs through the spectacular woodland of the Padarn Country Park.

The whole of Llyn Padarn is a Site of Special Scientific Interest and home to a rare type of fish called Arctic Charr. Legend has it that is was brought here from Rome by the early Christians while scientists believe it has survived in the lake since the ice age; either way it's a pretty robust fish that's been around for some time. It inhabits the depths of the lake which at a deepest point of 29m means they're not going to interfere with your swim.

Starting in Llanberis; the heart of Snowdonia’s industrial history the Triathlon combines stunning scenery with epic challenges. Swim in the fresh water of Llyn Padarn, run on a combination of trail and road through the historic slate quarries and cycle over the mountain passes; all in the shadow of Wales’ highest peak, Snowdon. The sprint distance bike course is entirely on fully closed roads making it a perfect introduction to cycling Snowdonia’s famous mountain passes.

Transition will only be open for racking on the day of the event. It is not possible to leave your bike overnight.

Please arrive at least 45 minutes before the start of your race to ensure there is plenty of time for transition and the registration process.

Wearing of wetsuits for the swim discipline will be mandatory.

Competitors must provide their own bike, in good working order. Helmets are mandatory.

This is a truly fantastic weekend to be part of and spectators are an integral part of creating an epic race day atmosphere.

The event village provides the perfect base for all spectators.

If you would like to find out more about volunteering at this event, please get in touch with: [email protected]

Do I need to be a BTF affiliated member?
No, you do not need to be a member, however all non-members will have to pay £5 fee on the day at registration. If you are a BTF member, please bring your license with you.
How will I know my finishing time?
During and straight after the event, you will be able to check your time via the live tracker on the official event website. Alternatively, all official results will be available on the website after the event.
When will I receive information on final instructions, what kit I require to participate etc. for an event I've entered?
You will receive a final instructions email approximately 10 days before race day. The email will give you all the information you require i.e. where registration is, safety instructions, clothing requirements etc.
What is the age limit?
Competitors must be 17 or over to enter and take part in the full triathlon and 15 or over for the sprint triathlon. 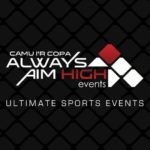 Always Aim High Events was founded in 2010 by Tim Lloyd and Nigel 'Kenny' Kendrick. The first event was the now iconic Slateman Triathlon 2011 attracting just over 400 competitors (it now regularly exceeds 1,000), with a vision that included the Snowman and Sandman - the three events which now make up the Adventure Triathlon Series. From that one event we now host 34 all inclusive events over 9 weekends, with many more planned for 2019 and beyond. In 2015 Always Aim High Community Events was set up as a not for profit organisation to help with engaging with and hosting local community events. At Always Aim High we are extremely proud about delivering the UK's ultimate triathlon, cycling, running and swimming challenges in the most beautiful and iconic locations that we can find. From epic mountain, coastal and city triathlons, to breathtaking cycle sportives which cover the length and bredth of Snowdonia, there's something for everyone at Always Aim High Events!