Roche Abbey is definitely a hidden gem, it’s not very well known, and nevertheless it’s very beautiful. Roche Abbey is nestled away in South Yorkshire near the picturesque village of Maltby. The races will start and finish within the grounds of the glorious Roche Abbey and will encompass trail and track running through Lord Scarborough’s land, which originally formed part of Sherwood Forest.

Roche Abbey was founded in the 12th century by Cistercian monks; it was once home to 50 monks and 20 lay brothers. It is beautifully set in a valley landscaped by Capability Brown. The ruins of Roche Abbey are now the centre piece of the beautifully designed landscape.

Apparently Roche Abbey is a paranormal hotspot with lots of scary activity. The Abbey house which is only 240 years old, which now houses the Abbey shop as many tales surrounding it. One tale is of a Lady in Grey who can be seen looking out of the upstairs window where the sound of a wailing child can also be heard. Towards the end of the Abbey there lies a small stone coffin and it is said if one stares at it long enough, a face will appear….. Yikes!

So come running with us for miles with smiles and enjoy the hidden away treasures in this lesser known part of the world.

Hilary W
"An unmissable 4 lap route through Roche Abbey and surrounding estate. The..."
See all reviews

How to enter the Roche Abbey Trail Running Festival 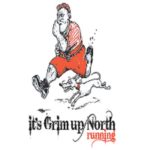